Skip to content
It is a well-known fact that the Earth was once covered in large animals that we now call dinosaurs. These creatures came in a multitude of colors, shapes, sizes, and types. Just like today’s animals, the dinosaurs were incredibly diverse. There were certain things they had in common, but overall, every type of dinosaur was completely unique. First, consider the diet. Just like the wildlife that we know today, there were dinosaurs who ate only meat, ones who ate only vegetation, and some that ate both. The carnivores were the predators and the herbivores were the prey. This is the normal system of life that has reigned as long as the Earth has stood. There are always predators and there is always prey. This is how this part of the ecosystem works. Consider coyotes and deer. Both live peacefully in their chosen habitats, but when a coyote pack is hungry, the find a herd of deer, choose which one(s) to go after and take down their dinner. Afterward, the coyotes will take their kill and leave the rest of the deer in peace. The same is true of the predator/prey relationship during the time of the dinosaurs. Now consider that some dinosaurs lived partially in the water, some could fly, and remained entirely on land. Some dinosaurs walked on four legs, some on two. Certain types of dinos had horns, some multiple horns, others had none. Some dinosaurs were herd animals just like many of the animals we know today. Others preferred to live and hunt on their own. Yes, the dinosaurs were diverse and how they lived is quite evident, but how did they die? That is the question that will be addressed here.
There are quite a few different theories regarding the demise of the dinosaurs. Some have scientific evidence to support them, others are purely conjecture. Still, others are entirely outrageous. The primarily accepted theory is that an enormous asteroid hit the Earth and subsequently eradicated. This is the favorite theory of the scientific community, some scientists even believe that they have proof. Others feel that this is not an acceptable answer. All we have is the Earth itself to give us clues and insights into what happened all of those years ago. Some believe that instead of a single asteroid, it was a meteor shower in which countless meteors struck the Earth. It is quite difficult to imagine, although this theory has been depicted a few times in cinematic history.  There have been a few scientific studies and some research that posits exactly how the event happened and what it would have been like. If you are interested in pursuing these studies, the internet and your local library are the best places to look. You will need to search for paleontology research and studies on the specific subject of the extinction of the dinosaurs. Is this really what killed the dinosaurs all of those years ago millions of years ago? Perhaps.
The next theory to consider is that the dinosaurs were wiped out by the great flood depicted in many ancient texts such as the bible. This story is best known as being from the bible, but many cultures have a similar story of a giant flood unlike any other that covered the Earth. 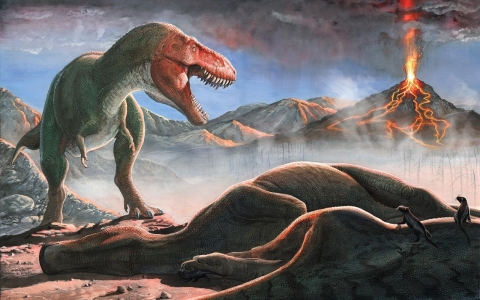 The classic story that most people know involves a man named Moses who built a huge boat called the Ark. This boat was so large that it was to be able to hold two of every type of animal. The classic depiction seen in posters and children’s books often show lions, tigers, monkeys, elephants, and giraffes boarding the ark, but there are many more animals that would have had to be present. According to the Bible story, God was sending the flood to purge the Earth of evil that had rooted deeply in mankind. The only humans there were to be saved was Moses, his wife, his sons, and their wives. Of course, in the stories from other cultures, there is no mention of the man known as Moses, only of a great flood that covered the Earth in water. The theory believes that, for whatever reason, dinosaurs were not included in the animals that were to be saved and therefore, they were wiped out as the flood waters rose. There has not been a great deal of scientific research done to prove or disprove this particular theory or the origin story. However, an incredibly large, boat-like vessel was discovered on the mountain that the Ark supposedly landed on when the flood waters were beginning to recede. So, did a great flood take out the dinosaurs? Perhaps.

Another theory is that the cause of the extinction of the dinosaurs lies with a disease. This theory presents the idea that, after thousands of years with coming into contact with any type of disease, the dinos had no immune system to speak of. Therefore, when the disease developed and was introduced to the dinosaurs, it spread quickly and because their bodies were not equipped to fight off the illness, it proved fatal. Over a small amount of time, the disease spread to every dinosaur and effectively put them into extinction. This particular theory has even less to back it up than the previous ones. While science is working hard to make strides in discovering everything there is to know about the dinosaurs, it is difficult to learn about certain aspects of their existence. Of course, basic science dictates that, if there are dinosaurs, there must be more than one at any given time as it is impossible that a dinosaur today would be one and the same with the one that roamed the Earth during the jurassic period when they ruled the earth Therefore, it would be necessary for there to be a male and female at any given time. So, is it possible that a deadly disease wiped out the dinosaurs? Perhaps.
The last theory to consider is that dinosaurs did not go entirely extinct. Those who believe in this theory believe that there are still some dinosaurs on the Earth today. This primarily comes in the form of legends such as the Loch Ness monster and Mokele-mbembe. These are believed by many to believe dinosaurs. Is it possible that there are still dinosaurs hiding in plain sight in certain parts of the world? Perhaps.